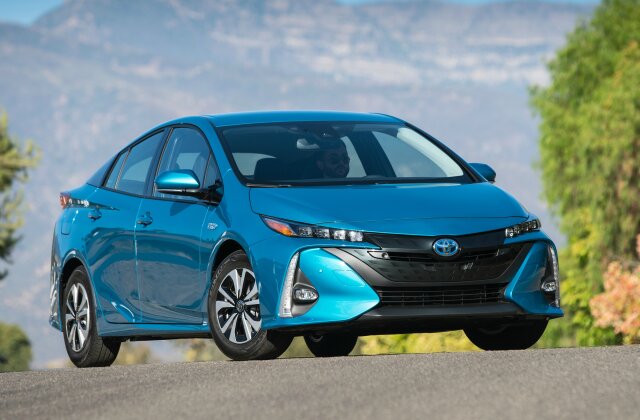 If you’re looking to save money on a car, shopping the used market is a wise choice. Opting for a certified pre-owned (CPO) model will cost you a bit more, but it adds peace of mind since CPO cars are inspected, reconditioned, and typically covered by a manufacturer-backed warranty.

Choosing a hybrid car can save you even more money due to low fuel costs. In addition, some hybrid and electric cars can be found on the used market with appealing deals.

While hybrid cars are more expensive than traditional cars when they’re new, they can be heavily discounted on the used market due to a lack of demand, accelerated depreciation, and the fact that some hybrid and electric cars are eligible for tax credits when they’re new, so this drives down their resale value.

On the following slides, we rank the best used hybrid cars that are available as certified pre-owned models. All cars featured here are either 2018 or 2019 models, and we chose them based on their high U.S. News overall scores. For each car, we picked the used model year with the highest overall score. Other used model years are often similar in many ways, so you can use this article as a starting point as you begin shopping for a used hybrid car.

It’s important to note that we update our scores and rankings on a continuous basis. For this reason, what you see in this article may not match up precisely with what’s in each car’s review.

Continue reading to find out which used hybrid cars are the best choices in 2022.

The Toyota Prius Prime came to market for the 2017 model year. It looks largely the same today, and it hasn’t really changed mechanically. However, features have changed over the years, and beginning in 2020, it became a five-seater rather than a four-seater.

No matter which model year you choose, this plug-in hybrid electric vehicle (PHEV) offers 25 miles of EPA-estimated electric-only range. It’s also one of the most fuel-efficient cars on the market today.

The 2018 Prius Prime features first-rate safety scores, a refined powertrain, and a plethora of standard features. The Prius Prime also has a nice cabin with a good amount of passenger and cargo space. However, it’s not going to win many races, and its infotainment system is frustrating to operate. 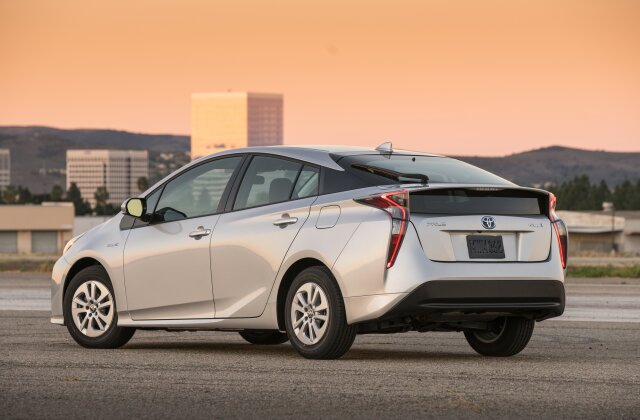 If the Prius Prime is on your radar, you may also want to consider the standard Toyota Prius. The two cars are similar in many ways, but the Prius doesn’t plug in, so it doesn’t offer any electric-only range. What it does offer are incredible fuel economy and an expansive cargo area.

The 2018 Prius delivers a smooth ride and relatively agile handling, but its hybrid powertrain struggles to accelerate at highway speeds. It features an upscale interior and seating for five people, though its rear seats are best left to smaller riders.

The Prius has a history of good crash test ratings, and it comes equipped with the Toyota Safety Sense suite of active safety technologies. It also has Bluetooth and a touch screen, but the infotainment system isn’t very intuitive, and the 2018 model doesn’t have Apple CarPlay or Android Auto. 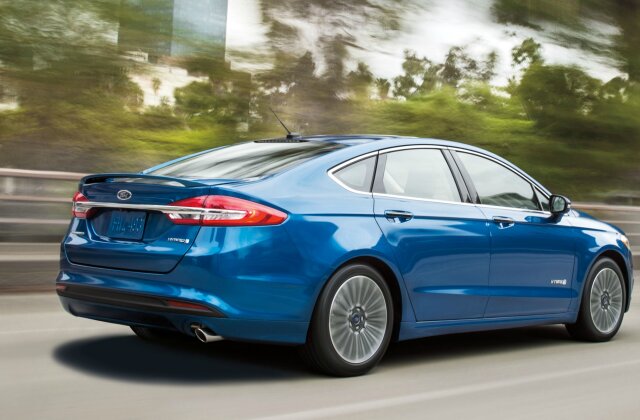 Ford discontinued the Fusion Hybrid after the 2020 model year, so your only option is a used model. The 2018 Fusion Hybrid is nearly the same as the latest model, though Ford added the Co-Pilot 360 suite of safety features as standard in 2019.

The Fusion Hybrid’s main strengths include its high safety scores, handsome and roomy cabin, and well-balanced ride and handling. This Ford sedan also earns an above-average predicted reliability rating and can be found on the used market at bargain prices.

Ford’s midsize hybrid car isn’t the best option if you crave peppy acceleration, and its standard features aren’t as high-tech as rivals’. The 2018 Fusion Hybrid has a 4.2-inch display screen, Bluetooth, keyless entry, and dual-zone automatic climate control as standard, though some used models will feature niceties like Android Auto and Apple CarPlay.

Ford also produced the Fusion Energi plug-in hybrid, which returns the same 42 mpg. It has 21 miles of electric-only range, and with electricity and gas power combined, it gets 97 MPGe. You may be able to pick up the PHEV on the used market for less than the traditional hybrid, and it will save you even more money on fuel. 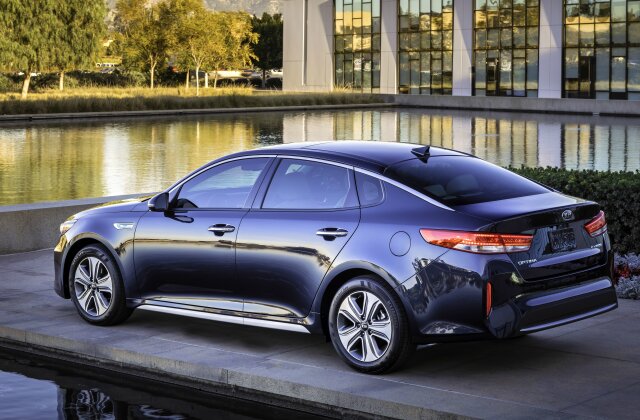 Like many sedans, the Kia Optima Hybrid was discontinued after the 2020 model year. However, Kia replaced it with the all-new K5, though it doesn’t look like the automaker is going to offer the 2021 K5 in a hybrid or PHEV configuration.

Aside from having fewer standard safety aids, the 2019 Optima Hybrid is virtually the same as the 2020 model, and it’s often deeply discounted on the used market. The 2019 Optima Hybrid has an intuitive infotainment system, smartphone connectivity, and a few advanced safety systems. It also earns good scores for safety and predicted reliability.

Unlike some competing hybrid sedans, the Optima delivers eager acceleration and ample power for highway driving. It also rides and handles quite well for its size. If you want to save more money, consider the Optima Plug-In Hybrid, which has an all-electric range of 29 miles and returns an impressive 103 MPGe. 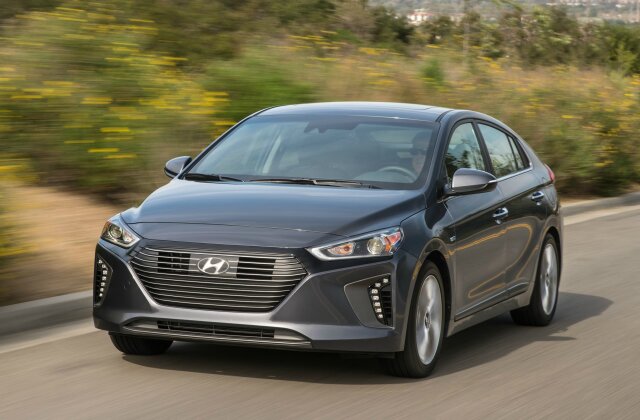 The Hyundai Ioniq hybrid is one of the most fuel-efficient cars on the market today, and it also comes as a fully electric car and a plug-in hybrid electric vehicle (PHEV). The Ioniq came to market as a 2017 model, and the PHEV joined the lineup in 2018. Over the years, it has seen feature updates, and the electric model got more range in 2020, but a used model is still a solid option. 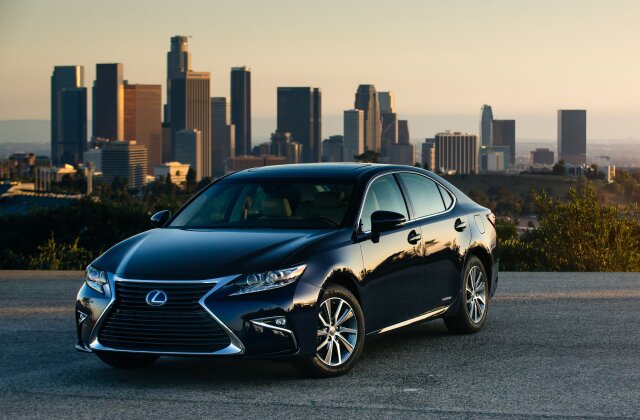 Lexus redesigned the ES Hybrid for the 2019 model year. Since the 2018 model is from the previous generation, you’re more likely to find a good deal on it, and it also has a higher U.S. News overall score.

The 2018 ES Hybrid has an elegant and spacious interior, a near-perfect predicted reliability rating, and good crash test scores. It’s not perfect, however. This hybrid sedan’s trunk is small, its overall performance is bland, and its infotainment system can be confusing to use.

With that said, this Lexus hybrid car is a worthy option if you’re looking for a comfortable and practical hybrid sedan that’s packed with features. It delivers a silky ride, accelerates well enough for most daily driving, and returns superb fuel economy for the class. 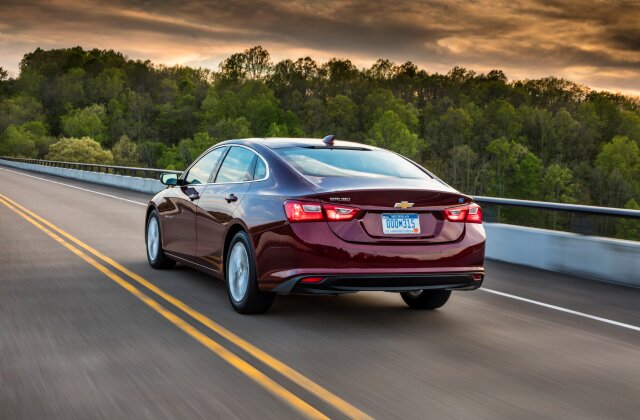 The Malibu Hybrid is yet another sedan that’s been discontinued. In fact, it was only available through the 2019 model year. The Malibu Hybrid gets great gas mileage, it’s easy to drive, and it’s roomy, safe, and reliable.

This Chevy isn’t as fun to drive as many midsize sedans, but it has an energetic powertrain, a relaxed ride, precise steering, and composed handling. It also features a refined regenerative braking system with a pedal feel that’s like traditional friction brakes.

The 2019 Malibu Hybrid features a responsive touch screen, Apple CarPlay, Android Auto, a Wi-Fi hot spot, and GM’s Teen Driver system as standard. When it was new, it didn’t come standard with any active safety aids, but several were available, so you may find a used version that’s well-equipped. 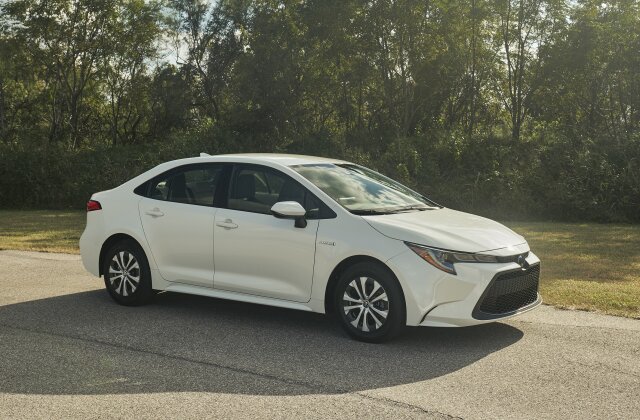 The Toyota Corolla Hybrid was a brand-new model for 2020, so there aren’t a lot of copies available on the used market. However, those that are available tend to be gently used cars with low mileage.

We named the Corolla Hybrid the winner of our Best Hybrid and Electric Car for the Money award in 2020 and 2021. The Corolla Hybrid is one of the cheapest hybrid cars available when new, and opting for a used 2020 Corolla Hybrid will save you money over a new model.

The Corolla Hybrid returns outstanding gas mileage and has a fantastic predicted reliability rating and top-notch crash test ratings. Its strengths include its comfortable ride, nice cabin, respectable passenger space, and wealth of standard tech and safety features. However, its powertrain struggles to accelerate to highway speeds.

The 2020 model features Apple CarPlay, Amazon Alexa, a Wi-Fi hot spot, and a long list of safety technologies. It is notable that the 2020 Corolla Hybrid does not have Android Auto, however. 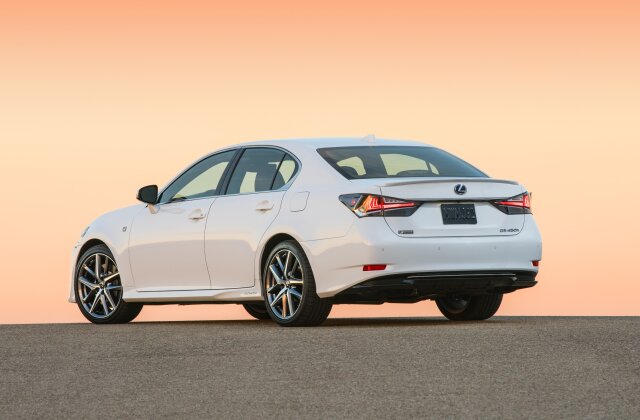 Lexus stopped producing the GS Hybrid after the 2018 model year, and it tends to sell at discounted prices on the used market. Aside from its small trunk and mediocre fuel economy, it’s a terrific option for hybrid car shoppers.

The 2018 GS Hybrid features a premium interior, spacious and supportive seats, and impressive acceleration. In addition, this rear-wheel-drive midsize hybrid sedan earns superb ratings for safety and predicted reliability. The GS 450h rides and handles better than most rival hybrids, and this is especially true if you can find a used copy with the F Sport package.

The GS 450h is packed with attractive standard niceties, such as leather upholstery, heated and ventilated front seats, dual-zone automatic climate control, and a moonroof. Moreover, this sedan is teeming with advanced driver assistance systems, and it even has features like rain-sensing wipers and automatic high beams. 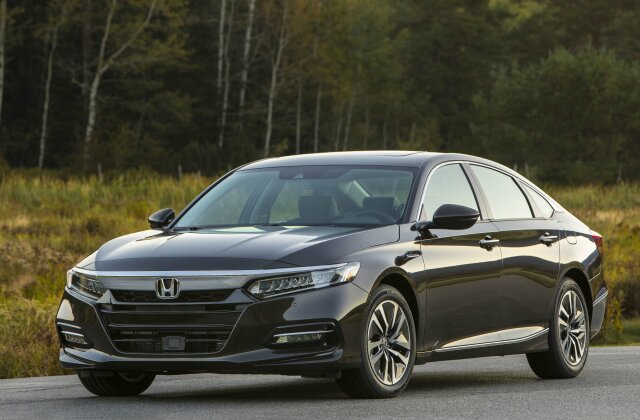 The Honda Accord has long been considered a top choice among midsize cars. Opting for the Accord Hybrid gets you just about everything that’s fantastic about the gas-only Accord while saving you money at the gas pump. At 47 mpg, the Accord Hybrid bests most midsize hybrid cars.

The 2018 Accord Hybrid offers roomy rear seats, a large trunk, a relaxed ride, and composed handling. It doesn’t have potent acceleration, but it never feels underpowered, even on the highway. To top it off, this Honda hybrid earns excellent ratings for safety and predicted reliability.

The 2018 model comes packed with active safety systems regardless of the trim level. However, used shoppers may want to search for an EX model, which will be equipped with a touch-screen infotainment system, Apple CarPlay, and Android Auto. Moving further up the trim ladder adds leather upholstery, a Wi-Fi hot spot, wireless device charging, heated and ventilated front seats, and more. 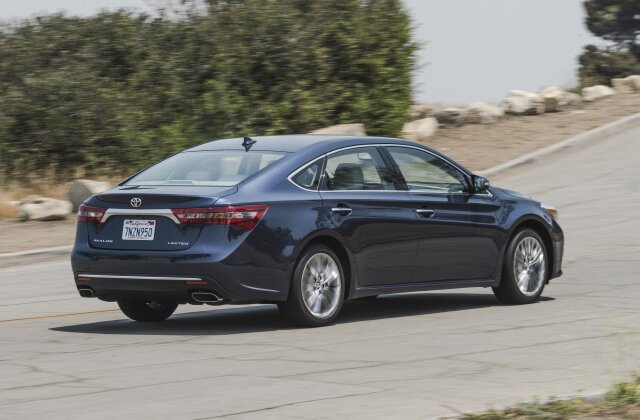 The Toyota Avalon Hybrid is your only option if you’re looking for a large hybrid car. It was redesigned for the 2019 model year, so if you like the current generation, you may want to start there. However, the 2018 model has a higher overall score, and you should be able to get it at a more reasonable price on the used market.

The Avalon Hybrid was a finalist for our 2018 Best Large Car for the Money and Best Large Car for Families awards. It features a luxury-grade cabin, expansive seats, silky ride quality, and, of course, stellar gas mileage for a large car.

This Toyota hybrid doesn’t accelerate very quickly, and its trunk is smaller than rivals’, but it’s easy to drive, cheap to own, and safe and reliable. The 2018 model came well-equipped when it was new, with leather upholstery, heated front seats, a 7-inch touch screen, Bluetooth, Siri Eyes Free, and more. It also has a few key safety systems.

You’ll have to search for a 2019 model if you want Apple CarPlay, and sadly, Amazon Auto just joined the features list for 2021. 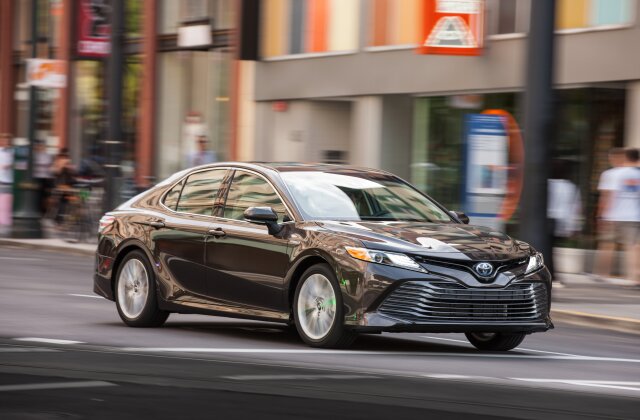 Toyota completely redesigned the Camry Hybrid for the 2019 model year, so you can get a used version that’s much like the current offering in most ways. The 2019 Camry Hybrid has Apple CarPlay, Amazon Alexa, a Wi-Fi hot spot, and several active safety technologies as standard, though it isn’t available with Android Auto.

While the Camry Hybrid is the best used hybrid car based on our rankings, it’s not perfect. Critics noted that its powertrain occasionally lags, and its interior isn’t as fancy as some competing models. However, these are only minor blemishes on a car that’s a solid option in almost every other way. 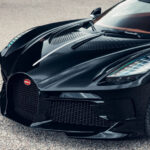 May 1, 2022
Exclusive Sports Cars You Can Afford 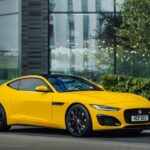 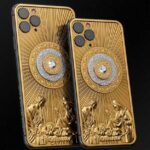 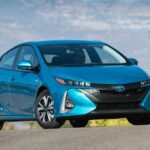 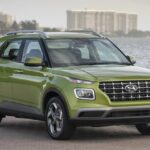 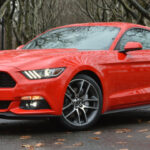